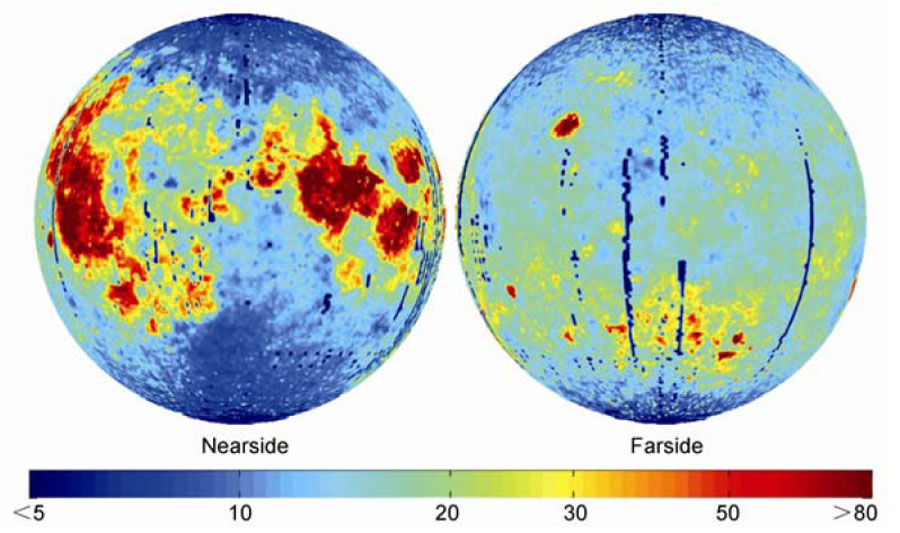 model of He-3 abundance (ppb/m^3) based on regolith thickness, from WenZhe Fa and YaQiu Jin

Joel Raupe seems to have been one of the first to notice a publication by members of the Chinese Chang-E-1 spacecraft team on the lunar abundance of He-3. Helium-3 is a stable isotope of helium created by fusion within the Sun. Over the last few billion years He-3 has been deposited in the lunar regolith by the solar wind. He-3 has been of great interest to science fiction writers and dreamers as a fuel that could produced, by being fused with deuterium, all the energy humans on Earth need. He-3 is rare on Earth, but its abundance on the Moon may be the main reasons that humans will go to the Moon to stay. And wIth this Chinese map we (and the Chinese) now know where the He-3 is concentrated. The map was derived not from direct measurement but from a complex modeling starting with microwave thermal emissions measured by Chang-E-1. The calculation also includes modeling of solar wind variation, retention of He-3 in the regolith, age and TiO2 abundance of the regolith. Couple all of this with measured He-3 abundance as a function of TiO2 in Apollo samples, and you get the map above. The highest He-3 concentrations occur in Mare Tranquillitatis, Fecunditatis, Moscoviense and Oceanus Procellarum. The fact that the Imbrium and Serenitatis lavas are hardly visible is because they lack high TiO2 abundances. This is still a somewhat crude map because the microwave radiometer has a spatial resolution of only 30-50 km, and penetrates only about 10 m. It is hard to tell exactly, but the planned landing site for Chang-E-2 in Sinus Iridum is not in a high He-3 region, surprising since He-3 is an official reason for the Chinese lunar exploration program.