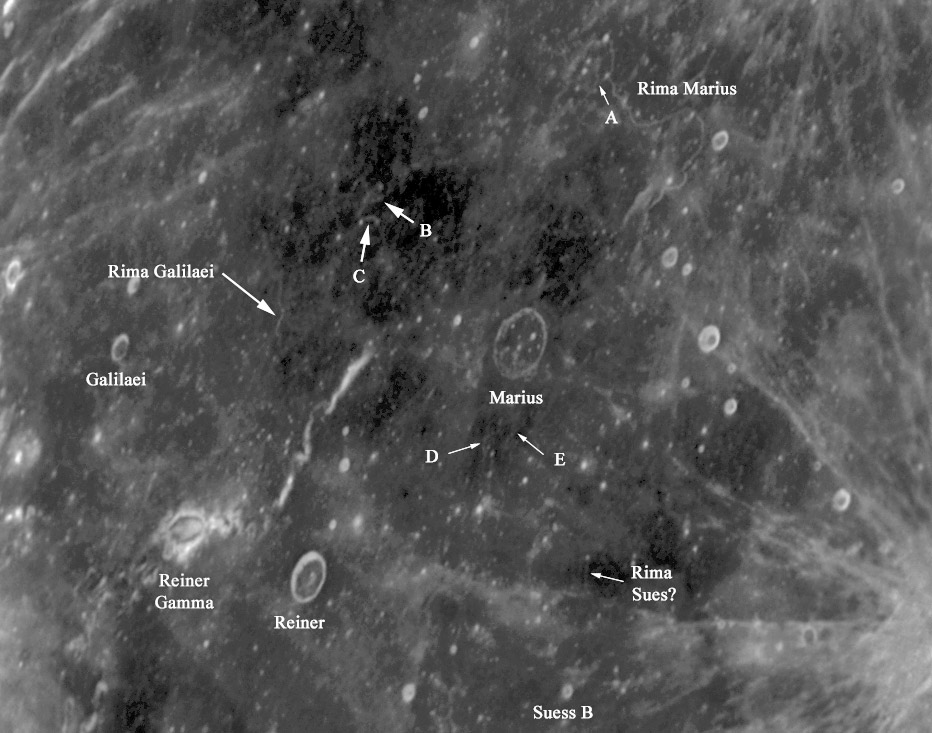 The region surrounding Marius is noted for volcanic landforms including domes, wrinkle ridges, and sinuous rilles. The domes and wrinkle ridges are not hard to spot in small telescopes under low angle lighting, but the rilles are more of a challenge. Four rilles that originate in the Marius Hills are difficult to see visually, but can be imaged with medium size telescopes. Most images show them at relatively low sun angles, leaving the impression that they fade into the glare with high overhead lighting. I was surprised to discover that a relatively bright albedo causes them to stand out quite well against the basaltic background at a very high sun angle. Rima Marius winds its way along the northern edge of the Marius Hills. Towards its western end another thin, bright sinuous feature labeled "A" is visible to the south that runs northward, then approach a bend in Rima Marius. Only the southern portion is distinct, and the northern end becomes lost in surrounding bright albedo features. It is uncertain if feature "A" is a rille or the margin of a wrinkle ridge, but it might also be a crater chain. Arrows "B" and "C" point to short portions of rilles shown in the July 10, 2008 LPOD. On the western edge of the Marius Hills, Rima Galilaei is visible running north-northwest and is the other rille mentioned in the prior LPOD. I have never seen these three rilles in my other images, but at this illumination their bright albedo makes them stand out. The question arises as to why the rilles are brighter than the surrounding areas. Might cascading of material by gardening or by seismic events cause differences in soil maturity on the steep inner slopes, versus more gently sloped or flat areas, and hence the albedo? Regardless of the answers to these questions, observation of lunar areas under high angle illumination is a rewarding endeavor that holds a number of surprises and places our understanding of the surface of the moon in a whole new light.

Tomorrow's LPOD: Then and Now and Forever